You want folks to get the Vaccine? Stop using bold face liars as your spokespeople. 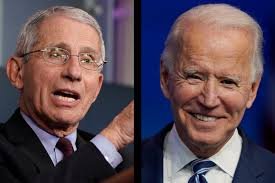 Stop  saying the vast majority not getting the vaccine are Conservatives. Stop using people that attacked President Trump and his medical professionals. Stop using flip flopers like the fauch. Stop using liars like Biden and his administration, INCLUDING HIS MEDICAL PROFESSIONALS. THEY HAVE NO CREDIBILITY.

People from the left and right still remember how Biden, Harris, and their cult said that they wanted nothing to do with what they called the Trump vaccines. The fauch said that the vaccine wouldn't be ready till the end of 2021 0r 2022. But the same folks were screaming sweet baby Jesus I want my vaccine. First in line. First ones to get what they called the Trump vaccine.

Biden Harris The fauch Liars
China, Mexico and US Trade. How the United States, Canada and Mexico are now the largest blocks in the world!
How Two Countries face a Trade War
Guns and Crime While Democrats scream ‘abolish ICE,’ child sex trafficker Claudius English convicted thanks to ICE