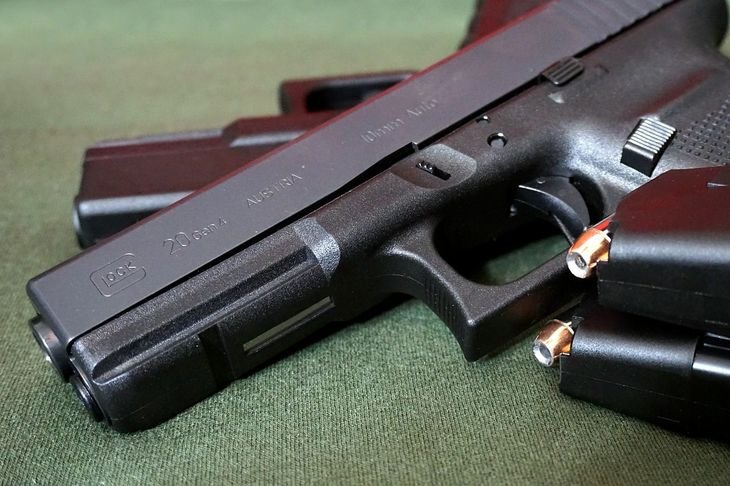 According to police the intended victim, a 48-year old man, had just pulled into his driveway last Thursday night and was walking towards the door of his home when the two teens pulled up beside him, with one of the pair pointing a gun at the man and demanding his keys.

The man told police he flung his keys, took cover under a nearby car and pulled out a pistol. He said he saw one teen by his vehicle, pointing a gun at him. The man told police he fired a single gunshot at the teen then ran for his house. He said he heard someone scream an expletive, then both teens drove away on Louisa in their vehicle. The teens picked up a third person then went to the hospital. There police seized two pistols, one of them stolen, from the accomplice, who told officers the guns belonged to him and the wounded suspect.

According to police, the suspected accomplice has admitted his involvement in the carjacking, though there’s no word on whether the suspect who was allegedly armed has also confessed to participating in the crime.

While the New Orleans Advocate notes that there have been at least four other carjackings reported since last May in a four-block area where this carjacking took place, the bigger concern in New Orleans is over the large numbers of teen suspects that have been taking part in these crimes. Just last month police charged four juvenile suspects with murder after an attempted carjacking led to the death of a 73-year old woman.

Police chief Shaun Ferguson said tips led to the arrests of the teens — a 17-year-old boy, a 16-year-old girl and two 15-year-old girls — in the hours after the Monday afternoon carjacking. Two were turned in by their parents. All face second-degree murder charges, and Ferguson said he will recommend that they be charged as adults “That’s a conversation that my team will have with the district attorney’s office,” Ferguson said at a Tuesday morning news conference. “I would say absolutely, I encourage, I will ask, that they be charged as adults. … I mean, look at the nature of the crime.” Ferguson confirmed that Linda Frickey died after she become entangled in a seatbelt as carjackers sped away with her vehicle. “The door had closed on the seatbelt, but she was stuck in it,” resident Todd Ecker told WVUE-TV on Monday. “I got out of my vehicle, screaming for them, ‘Please stop, you’re dragging a lady.’ Other neighbors were also screaming at them.”

Frickey’s arm was severed as she was dragged for a full city block in full view of neighbors like Todd Ecker; a horrific detail that very well may have been on the mind of the 48-year old armed citizen when he too was told to give up his keys or die.

While New Orleans police have been touting a recent decline in carjackings, the fact remains that the numbers could easily spike again, and I’m glad to see that at least some residents are thinking seriously about their own safety and security and choosing to protect themselves with a firearm. You never know what can happen, even in those circumstances where you feel safe and secure, and while I’m fundamentally an optimist at heart, I simply can’t fathom putting my trust and faith in the person robbing me at gunpoint to keep me safe from harm.

crime gun control
China, Mexico and US Trade. How the United States, Canada and Mexico are now the largest blocks in the world!
How Two Countries face a Trade War
Guns and Crime While Democrats scream ‘abolish ICE,’ child sex trafficker Claudius English convicted thanks to ICE
Anyone posting a threat especially against a law enforcement officer or politician will be banned.