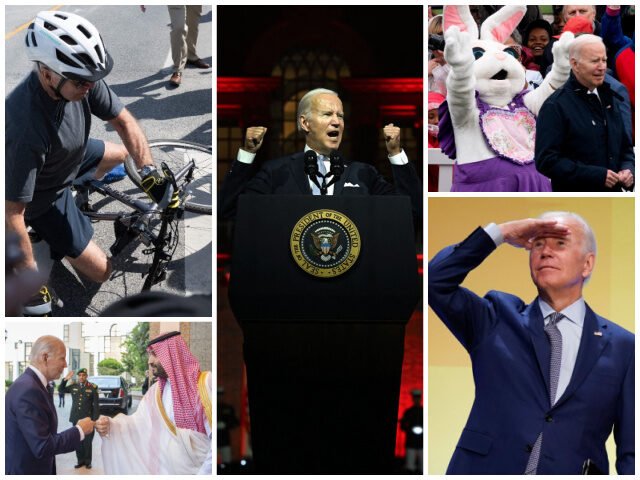 Brietbart recorded 25 times Joey boy made an ass of himself.

In August, Biden publicly struggled to put on his sport coat after exiting Marine One at an airport during a visit to Kentucky.

While celebrating Easter, Joe Biden wandered off and started talking to reporters, who asked questions about Afghanistan.

Biden spent the second part of his presidency pumping up his cheerleading for electric cars to help save the planet, but during a visit the Detroit Auto show, he revealed his true desire for a gas powered Corvette.

22. Joe Biden: ‘I and so Damn Many Other People I Grew Up with Have Cancer’

In July, President Joe Biden appeared to claim he suffered cancer as a result of pollution in the state of Delaware. “That’s why I and so damn many other people I grew up with have cancer,” Biden continued. “And why … for the longest time, Delaware had the highest cancer rate in the nation.” White HouseThere is no record of Biden suffering from a serious cancer diagnosis.

In December, Biden repeated a false story about a soldier who did not want to receive a medal for his actions of bravery but got nearly every detail of the story wrong.

In November, Biden stated his belief that coal power plants should be shut down entirely, despite protests from Democrats from coal-producing states.

In December, Biden welcomed French President Emmanuel Macron to the White House, gripping his hand in an awkward handshake while welcoming him.

Biden expressed his frustration with freedom of speech on social media during the midterm campaigns, complaining that billionaire Elon Musk purchased Twitter.

In October, Biden spoke to a local Florida Democrat mayor without realizing his comments were being captured on media cameras. The Independent / YouTube“Keep the faith,” Biden said as he approached Fort Myers Beach Mayor Ray Murphy after speaking to reporters. “And by the way, you’re raised the same way I was. No one fucks with a Biden.” It was unclear why Biden made the comment after viewing the devastating hurricane damage from Hurricane Ian.

In December, Biden signed a bill to prevent a railroad worker strike despite frequently promising to be a president to side with union labor.

In June, Biden admitted he failed to react soon enough to the infant formula shortage that rocked the country throughout the year. “I don’t think anyone anticipated the impact of the shutdown of one facility,” he told reporters, although company executives warned of the problem months in advance. “They did, but I didn’t,” he said shortly, referring to the CEOs.

In March, Biden repeatedly tried to blame Russian President Vladimir Putin for rising inflation and gas prices in the United States, in an effort to distract from his own failing domestic policies. “I’m sick of this stuff … The American people think the reason for inflation is the government spending more money,” he argued. “Simply. Not. True.” Biden’s fight to lower gas prices grew even more ridiculous as he demanded gas stations lower their prices, accusing the owners of being unpatriotic. “These are not normal times. Bring down the price you are charging at the pump to reflect the cost you are paying for the product,” Biden said. “Do it now. Do it today.”

12. Joe Biden: Brittney Griner an ‘Incomparable Athlete,’ Who ‘Represents the Best of America’

Biden made one of the worst political prisoner trades in modern American history by swapping a convicted Russian arms dealer for American athlete Brittney Griner. “Brittney is an incomparable athlete,” Biden said when the deal was announced after Griner was arrested in February at a Moscow airport by Russian officials for possession of cannabis vape cartridges.

In May, Biden falsely asserted that all mainstream religions supported what he believed was a constitutional right to an abortion. “Look, think what Roe says,” he said. “Roe says what all basic mainstream religions have historically concluded — that the right — that the existence of a human life and being is a question. Is it at the moment of conception? Is it six months? Is it six weeks?” The president failed to mention that the Catholic Church, of which he claims to be a member, teaches that life begins at the moment of conception. In October, President Joe Biden also said he supported the use of federal funds to help more women pay for abortions.

Biden claimed in a campaign speech in October that he traveled to 54 states to prevent Republicans from trying to repeal Obamacare. “By the way, if they do, that means — not a joke, everybody; that’s why we defeated it in 2018 when they tried to do it. We went to 54 states,” he said during a speech to Pennsylvania Democrats, appearing to forget that the United States has only 50 states. The president never clarified what he was trying to say.

8. In Poland, Joe Biden Goes Off-Script to Declare that Vladimir Putin Must Be ‘Removed from Power’

In June, Biden traveled to Warsaw, Poland to condemn Russian President Valdimir Putin for invading Ukraine, alluding to a public call for regime change. “For God’s sake, this man cannot remain in power,” Biden cried out at the conclusion of his speech. “God bless you all and may God defend our freedom.” The White House later tried to walk back the president’s statements, the third time they had to clarify his remarks during his trip to Poland. The president’s remarks alarmed leaders around the world, who believed that he needlessly escalated the war in Ukraine and Russia.

7. Joe Biden: ‘Let Me Start Off with Two Words – Made in America’

In October, Biden hailed the phrase “Made in America” as a slogan with “two words” even as signs at the event featured the common three-word phrase. “Let me start off with two words — Made in America,” he said, using three words. “Made in America,” he repeated, without correcting his mistake. “That’s not hyperbole, I’m not joking about that as you know.”

6. Joe Biden Refuses to Visit the Border During Trip to Arizona: ‘More Important Things Going On’

In December, Biden demonstrated again that he had zero interest in the ongoing border crisis, claiming there were more important things going on. When asked why he was going to the border state of Arizona without visiting the border, Biden replied, “Because there are more important things going on.” The president frequently dismisses the ongoing migrant crisis on the Southern border, which is both a national security risk and a humanitarian crisis, by comparing the flood of migrants making asylum claims to his ancestors who emigrated from Ireland.

In July, Biden greeted Saudi Crown Prince Mohammed bin Salman with an awkward fist bump, in one of the most hypocritical moments of his entire presidency to date. The president famously campaigned against the Saudis during his presidential campaign, vowing to treat them as a “pariah.” But as gas prices skyrocketed, he traveled to Saudi Arabia to try to increase foreign oil production, even while insisting his visit was not about high gas prices savaging the United States. Saudi Crown Prince Mohammed bin Salman greets President Joe Biden with a fist bump after his arrival in Jeddah, Saudi Arabia on July 15, 2022. (Saudi Press Agency via AP)

In September, Biden unleashed a series of political attacks warning of the “violent extremist” MAGA Republicans that posed a threat to Democracy. The president’s rhetoric was diametrically opposed to his claimed goal of restoring “the soul of the nation” as he instead called for the extinction of a political movement that threatened his party. “[T]here is no question that the Republican party today is dominated, driven, and intimidated by Donald Trump and the MAGA Republicans, and that is a threat to this country,” he said, during a speech in Philadelphia’s Independence Hall. President Joe Biden delivers a primetime address denouncing “MAGA” Republicans outside of Independence National Historical Park in Philadelphia, Pennsylvania, on September 1, 2022. (Jim WATSON/AFP via Getty Images)

The president was bathed in red light for his angry remarks, earning him mockery for his “Dark Brandon” moment in which he lied about his political opponents. “MAGA forces are determined to take this country backwards,” he added. “Backwards to an America where there is no right to choose. No right to privacy. No right to contraception. No right to marry who you love. They promote authoritarian leaders and they fan the flames of political violence.”

“I say this as a father of a man and won the Bronze Star, the conspicuous service medal, and lost his life in Iraq,” Biden said in October during a speech in Colorado. “I’m thinking about Iraq because that’s where my son died,” he said during a later speech in November. Biden’s son Beau served in Iraq, but he died years later of brain cancer at Walter Reed Medical Center in Bethesda, Maryland, in 2015 – not while serving his tour of duty. Biden never apologized for making the false claims.

In September, President Joe Biden mistakenly gave a shoutout to a Republican congresswoman who died in August. “Jackie are you here? Where’s Jackie?” Biden asked during his speech. “I didn’t think she was going to be here,” he added. Rep. Jackie Walorski (R-IN) died in a tragic car accident in August. The White House did not publicly admit Biden’s horrific gaffe, saying only that the Congresswoman was “top of mind” while the president spoke.

1. Joe Biden Tips Over on His Bike While on Vacation

In June, Biden tried to demonstrate his physical fitness by riding a bicycle in front of reporters, but when he stopped to talk he promptly fell over in front of the media, sparking widespread alarm.

“I’m good, I’m good,” he protested as Secret Service agents rushed to help the leader of the free world off of the pavement and back on his bike.

Joey Making a fool outof himself
China, Mexico and US Trade. How the United States, Canada and Mexico are now the largest blocks in the world!
How Two Countries face a Trade War
Guns and Crime While Democrats scream ‘abolish ICE,’ child sex trafficker Claudius English convicted thanks to ICE
Anyone posting a threat especially against a law enforcement officer or politician will be banned.