Have they no shame? Historic 102-Year-Old Lewis, Clark and Sacagawea Statue Toppled in Charlottesville 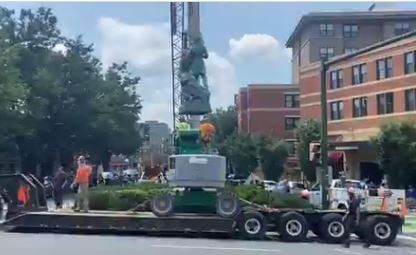 Have they no shame? Historic 102-Year-Old Lewis, Clark and Sacagawea Statue Toppled in Charlottesville. So now the left weren't happy with Democrat war heroes Lee and Jackson, they go after Sacagawea also? Let me guess, she was a closet Republican?

A 102-year-old public statue of Lewis and Clark and Sacagawea was toppled in Charlottesville on Saturday after the city council voted unanimously to remove the historic monument.  This from the city council.

The city of Charlottesville, Va. followed up its removal of two controversial Confederate statues Saturday with the lightning-fast toppling of a third local landmark: a monumental tribute to explorers Meriwether Lewis, William Clark, and Sacagawea.In an emergency meeting called with 20 minutes’ notice, the Charlottesville City Council voted unanimously to cancel another piece of public art targeted by left-wing activists.

Within minutes, a city work crew — the same group that had dismantled equestrian statues of Gens. Robert E. Lee and Thomas “Stonewall” Jackson earlier Saturday — arrived with ropes, a crane, and pry bars to wrench the artwork off the plinth where it had stood on Charlottesville’s West Main Street since 1919.

Lewis Clark Sacagawea Statue removed
China, Mexico and US Trade. How the United States, Canada and Mexico are now the largest blocks in the world!
How Two Countries face a Trade War
Guns and Crime While Democrats scream ‘abolish ICE,’ child sex trafficker Claudius English convicted thanks to ICE