By now you probably have heard about the Tommy Lee rant.

It was a tweet by the drummer for Motley Crue lashing out at and vowing retribution against Trump supporters, conservatives, religious Christians, and just about everyone else left out of the progressive coalition. 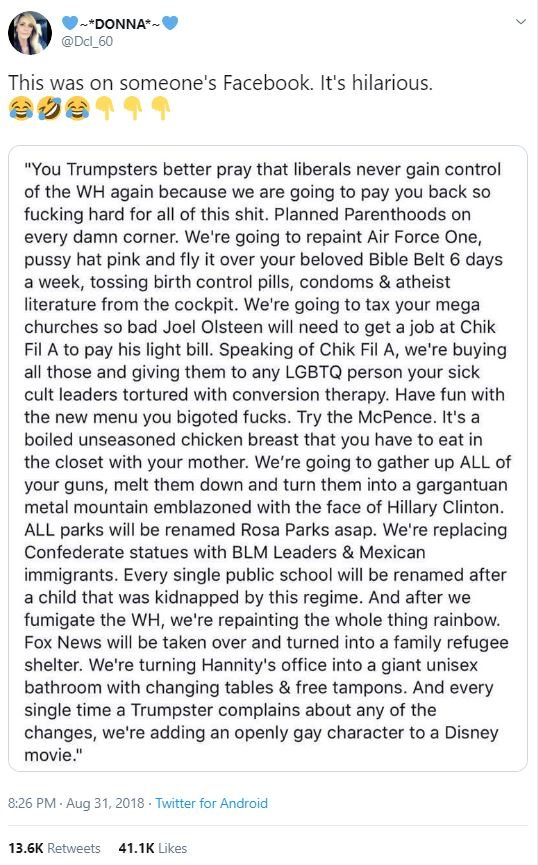 The Tommy Lee rant was not actually Tommy Lee’s rant. It was a repost of a rant that appeared a year ago on Democratic Underground, the 8Chan of the leftist activist class, which itself was a repost of a Twitter thread by Renee Torres that has been spread widely, including in this Tweet.

Read and savor each and every sentence, and as you do so, think of the mental anguish the tens of thousands of people praising this rant have been going through. They lost an election. Oh, the inhumanity!

Pure rage, like babies who didn’t get to play with the toy.

At a deeper level, it’s an accurate reflection of the dominant liberal political mindset — the deplorables are, well, deplorable. They have completely dehumanized and caricatured half the country.

If given the power, the goal of ranty liberals is to “pay you back so fucking hard for all this shit.” I appreciate the honesty.

Beyond that, I just laughed at liberals making Tommy Lee a hero, considering he was sentenced to 6 months in jail for beating his wife and used to have a  swastika tatoo.

Rant
China, Mexico and US Trade. How the United States, Canada and Mexico are now the largest blocks in the world!
How Two Countries face a Trade War
Guns and Crime While Democrats scream ‘abolish ICE,’ child sex trafficker Claudius English convicted thanks to ICE
//graizoah.com/afu.php?zoneid=3329310 //graizoah.com/afu.php?zoneid=3329313google-site-verification=KpGtpXKDA2lZfsWu61z2TxKFTbuCKHQ7iDRfHNgz97s