The NY Times, Its offical, get Trump no matter what the cost. 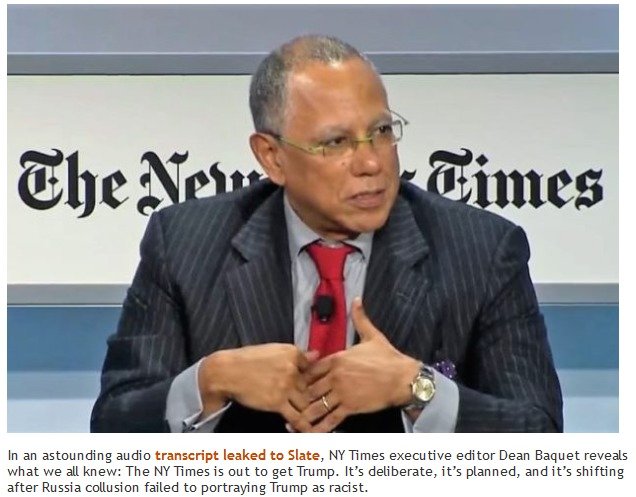 From the Slate article:

“What I’m saying is that our readers and some of our staff cheer us when we take on Donald Trump, but they jeer at us when we take on Joe Biden,” New York Times executive editor Dean Baquet told his staff in a town hall on Monday.

In the 75 minutes of the meeting—which Slate obtained a recording of, and of which a lightly condensed and edited transcript appears below—Baquet and the paper’s other leadership tried to resolve a tumultuous week for the paper….

Baquet, in his remarks, seemed to fault the complaining readers, and the world, for their failure to understand the Times and its duties in the era of Trump. “They sometimes want us to pretend that he was not elected president, but he was elected president,” Baquet said. “And our job is to figure out why, and how, and to hold the administration to account. If you’re independent, that’s what you do.”

That the Times is hyper-sensitive to reader complaints explains why the Times became part of #TheResistance in pinning its hopes on Robert Mueller. But when Russia collusion fell apart after the Mueller Report was released, the Times has decided to focus on Trump being racist, Slate writes:

The closest Baquet came to identifying a moment when the paper had misjudged current events was when he described it as being “a little tiny bit flat-footed” after the Mueller investigation ended. “Our readers who want Donald Trump to go away suddenly thought, ‘Holy shit, Bob Mueller is not going to do it,’” Baquet said. “And Donald Trump got a little emboldened politically, I think. Because, you know, for obvious reasons. And I think that the story changed. A lot of the stuff we’re talking about started to emerge like six or seven weeks ago.”

By this account, the question of how to address presidential racism was a newly emerged one, something the paper would need to pivot into. “How do we cover America, that’s become so divided by Donald Trump?” he said. “How do we grapple with all the stuff you all are talking about? How do we write about race in a thoughtful way, something we haven’t done in a large way in a long time?”

Here’s the key passage from the transcript (emphasis added):

Dean Baquet: If we’re really going to be a transparent newsroom that debates these issues among ourselves and not on Twitter, I figured I should talk to the whole newsroom, and hear from the whole newsroom. We had a couple of significant missteps, and I know you’re concerned about them, and I am, too. But there’s something larger at play here. This is a really hard story, newsrooms haven’t confronted one like this since the 1960s. It got trickier after [inaudible] … went from being a story about whether the Trump campaign had colluded with Russia and obstruction of justice to being a more head-on story about the president’s character. We built our newsroom to cover one story, and we did it truly well. Now we have to regroup, and shift resources and emphasis to take on a different story. I’d love your help with that. As Audra Burch said when I talked to her this weekend, this one is a story about what it means to be an American in 2019. It is a story that requires deep investigation into people who peddle hatred, but it is also a story that requires imaginative use of all our muscles to write about race and class in a deeper way than we have in years. In the coming weeks, we’ll be assigning some new people to politics who can offer different ways of looking at the world. We’ll also ask reporters to write more deeply about the country, race, and other divisions. I really want your help in navigating this story.

The Times has a vision of coverage moving forward, and it’s all about portraying Trump as racist. From the transcript (emphasis added):

Baquet: OK. I mean, let me go back a little bit for one second to just repeat what I said in my in my short preamble about coverage. Chapter 1 of the story of Donald Trump, not only for our newsroom but, frankly, for our readers, was: Did Donald Trump have untoward relationships with the Russians, and was there obstruction of justice? That was a really hard story, by the way, let’s not forget that. We set ourselves up to cover that story. I’m going to say it. We won two Pulitzer Prizes covering that story. And I think we covered that story better than anybody else.

The day Bob Mueller walked off that witness stand, two things happened. Our readers who want Donald Trump to go away suddenly thought, “Holy shit, Bob Mueller is not going to do it.” And Donald Trump got a little emboldened politically, I think. Because, you know, for obvious reasons. And I think that the story changed. A lot of the stuff we’re talking about started to emerge like six or seven weeks ago. We’re a little tiny bit flat-footed. I mean, that’s what happens when a story looks a certain way for two years. Right?

I think that we’ve got to change. I mean, the vision for coverage for the next two years is what I talked about earlier: How do we cover a guy who makes these kinds of remarks? How do we cover the world’s reaction to him? How do we do that while continuing to cover his policies? How do we cover America, that’s become so divided by Donald Trump? How do we grapple with all the stuff you all are talking about? How do we write about race in a thoughtful way, something we haven’t done in a large way in a long time? That, to me, is the vision for coverage. You all are going to have to help us shape that vision. But I think that’s what we’re going to have to do for the rest of the next two years.

This is a smoking gun. It shows the most powerful news organization in the country congratulating itself for setting the anti-Trump narrative on Russia collusion, and seamlessly transitioning to setting a narrative of Trump as racist after collusion flopped.

There is a collusion case to be made, but it’s not about Trump and Russia. It’s about powerful news organizations throwing their weight behind Democrats.

Trump
China, Mexico and US Trade. How the United States, Canada and Mexico are now the largest blocks in the world!
How Two Countries face a Trade War
Guns and Crime While Democrats scream ‘abolish ICE,’ child sex trafficker Claudius English convicted thanks to ICE
Anyone posting a threat especially against a law enforcement officer or politician will be banned.