Sneaking in the back door. 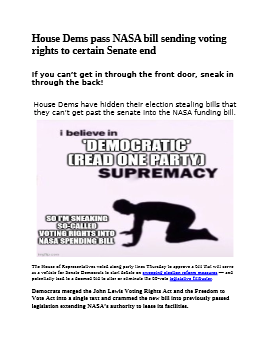 The House of Representatives voted along party lines Thursday to approve a bill that will serve as a vehicle for Senate Democrats to start debate on sweeping election reform measures — and potentially lead to a doomed bid to alter or eliminate the 60-vote legislative filibuster.

Democrats merged the John Lewis Voting Rights Act and the Freedom to Vote Act into a single text and crammed the new bill into previously passed legislation extending NASA’s authority to lease its facilities.  Because the so-called “shell” NASA bill already cleared the House and Senate, Democrats can kick-start debate on the Senate floor without Republican support. “We will have the ability to proceed to the legislation and debate it on a simple majority basis, something that’s been denied to us four times in the last several months because Republicans didn’t want to move forward,” Senate Majority Leader Chuck Schumer (D-NY) said Thursday morning. “Then, the Senate will finally hold a debate on the voting rights legislation for the first time in this Congress,” Schumer added, “and every senator will be faced with a choice of whether or not to pass this legislation to protect our democracy.”

Any attempt by Democrats to actually pass the election reform bill will fail in the 50-50 Senate, with no Republicans expected to support attempts to end debate. Schumer could then bring forward a rules change that would allow Democrats to bypass the filibuster, but that would also likely fail due to opposition from moderate Democrat Sens. Joe Manchin of West Virginia and Kyrsten Sinema of Arizona — who argue the filibuster is a fundamental tool of the Senate.

Top Democrats, including President Biden and Schumer, have ramped up pressure on Manchin and Sinema to support a carve-out to the filibuster rule in order to pass the election legislation. Biden was set to meet with Senate Democrats later Thursday to make his case once again. Senate Democratic leadership opted to pivot to election reform after the push to pass a sweeping social spending measure hit a wall last month, with Manchin voicing opposition to multiple provisions in Biden’s $2 trillion Build Back Better bill.

Schumer vowed earlier this month to bring rule change legislation up for a vote by Monday, Martin Luther King Jr. Day, if the voting bills did not pass. However, in the face of Manchin and Sinema’s steadfast support for the filibuster, Senate leadership may opt to forgo a vote on rule changes and be content with a lengthy debate on the topic. The “Freedom to Vote Act” would override a number of election rules put in place by some Republican-led states.

It would allow same-day voter registration and no-excuse mail voting, prevent states from requiring a photo ID to vote, allow felons to vote in all states and would require super PACs and so-called “dark money groups” to disclose all donors who contribute more than $10,000. The John R. Lewis Voting Rights Advancement Act looks to undo court rulings that weakened the Voting Rights Act of 1965 by requiring certain states to receive federal preclearance before enacting redistricting plans or new voting laws.

GOP critics argue that strong protections for minority voters remain in place under the Voting Rights Act and have called instead for the Senate to move on a bill to reform the Electoral Count Act to clarify Congress’ role in certifying elections.