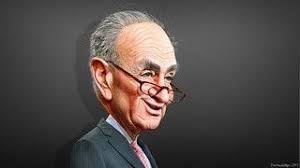 Sen. Chuck Schumer's threatening rhetoric to Supreme Court justices crosses a line. Below is a reprint of a USA Today Editorial.

For the Senate's Democratic leader to stand on the front steps of the Supreme Court and furiously shout words that sound very much like a threat against two high court justices is unseemly and warrants a full-throated apology.

"I want to tell you, Gorsuch; I want to tell you, Kavanaugh: You have released the whirlwind and you will pay the price," Senate Minority Leader Chuck Schumer roared Wednesday to a crowd of protesters angry over a Louisiana case before the court that threatens abortion rights. "You won't know what hit if you go forward with these awful decisions."

To refer to conservative justices Neil Gorsuch and Brett Kavanaugh by their last names was disrespectful. To seemingly menace them about a pending decision was beyond the pale. The remarks earned a rare and deserved rebuke hours later, when Chief Justice John Roberts said Schumer's words were "not only inappropriate; they are dangerous."

On Thursday, the New York senator tried to walk it back with an I'm-from-Brooklyn equivocation: "I should not have used the words I used. .... They did not come out the way I intended."

As they might also say in Brooklyn, it was a day late and a dollar short.

OPPOSING VIEW:Senate Democratic leader connects the dots between alarming rulings and the election

Not only did Schumer's rhetoric Wednesday sound foolishly threatening, but it reinforced a persistent view too many Americans hold about their political leadership — that Democrats and Republicans are really nothing more than two sides of the same coin.

It's a severe liability this year because elections are all about drawing contrasts. Whoever the Democrats nominate as their presidential candidate would certainly want to argue that they are a different kind of leader than a president who traffics almost daily in false and divisive rhetoric. Schumer "must pay a severe price for this!" Trump tweeted Wednesday night, displaying a distinct lack of self awareness.

Schumer Threats Violence Supreme Court Justices
China, Mexico and US Trade. How the United States, Canada and Mexico are now the largest blocks in the world!
How Two Countries face a Trade War
Guns and Crime While Democrats scream ‘abolish ICE,’ child sex trafficker Claudius English convicted thanks to ICE