Of cows and men 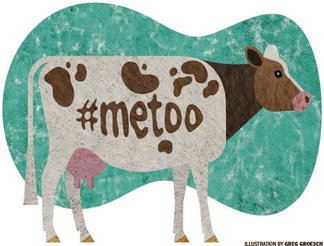 Are dairy cows dangerous contributors to  climate change or victims of toxic masculinity?

Perhaps they’re both, if you accept hysteria over cow-emitted methane, along with the sexual politics of feminists at a taxpayer-funded university.

It’s well known that the “Green New Deal” promoted by Democratic Party ingenue Rep. Alexandria  Ocasio-Cortez, New York Democrat, calls for eliminating cows. But did you know that milking cows constitutes sexual abuse? It does, according to a paper published by the Women’s and Gender Studies program at Brockport State University of New York and exposed by Campus Reform.

Titled “Readying the Rape Rack: Feminism and the Exploitation of Non-Human Reproductive  Systems,” the paper argues that “the dairy industry is a host for sex-based discrimination,” and a “site where sexual assault and objectification based on biological makeup are highly prevalent but ignored as we choose to neglect non-humans with whom we share a planet.”

The paper’s author, Mackenzie L. April, compares inseminating cattle to “rape” and milking to “sexual abuse.” She asks humans to consider “the importance of animals’ lives as equal to your own,” and then goes into full Marxist mode, encouraging activists to treat cows “similar to how you might validate and advocate for the struggles of women that you personally do not endure due to the privilege of race, gender, class, etc.” So, stack “human privilege”  right up there with “white privilege.”

Well, I have taken this to heart, but must confess something. My wife recently brought back a half gallon of unpasteurized, raw milk from Pennsylvania. It is udderly delicious. And now I can enjoy it with the same devil-may-care attitude of someone smoking a smuggled Cuban cigar.

Not that I support commerce with the Castro brothers’ predatory Communist  regime, even surreptitiously. The sooner that crowd is dispensed, the sooner their grip on their own country and miserable places like Venezuela will be loosened and the people freed, regardless of Bernie Sanders’ wishes.

Speaking of freedom, it would be nice to find some common ground so that Americans stop talking past each other. But this probably won’t happen soon. The division is far deeper than mere politics. It’s all about worldview and, deeper still, how each side regards America’s heritage and God. It’s about the clash of two religions,  one Bible-based, and the other careening  toward a revived paganism masquerading as agnosticism.

In his perceptive new book, “Last Call for Liberty: How America’s Genius for Freedom Has Become Its Greatest Threat,” Os Guinness  argues that today’s cultural and political struggles reflect the great difference between the revolutions of 1776 and 1789.

The French Revolution of 1789 was a revolt against royalty but also against any authority higher than whatever the people concocted. It soon devolved into a bloodbath and dictatorship. Its heirs are Marxism and all forms of socialism,  including National Socialism, Fascism and Communism.

Without its roots  in the biblical understanding of  human nature,  America has  become a “cutfl  ower culture” that will not long  survive unless there is a recovery  of values.

By contrast, British colonists in America in 1776 took a covenantal approach, grounding their new nation in rights given not by man but by God.

“To be sure, the American experiment was never a covenant with God, as the Jewish covenant  at Mount Sinai was,” Mr. Guinness writes, “but it is no longer what it has long been; a covenant   or constitution   under God.”   With Marxists   and other   anti-God secularists   firmly in   control of major   institutions that   transmit cultural   values – even   many churches   – “the American   experiment has   increasingly   become a constitution   without   God,” he writes.   The effects   are all around   us, from evergrowing   government   coercion,   to young people   fooled by socialism,  to crazed gunmen, to Drag Queen Story Hour, even to the insanity of the cow manifesto above.

Without its roots in the biblical understanding of human nature, America has become a “cutfl ower culture” that will not long survive unless there is a recovery of values that nourished the  birth of our self-governing republic,  Mr. Guinness writes.  A self-described resident alien from  Great Britain, Mr. Guinness is something  of a latter-day Alexis de Tocqueville,  the Frenchman whose perceptive  critique in the 1830s, “Democracy  in America,” informs us to this day.  At the heart of American liberty is  the understanding that no freedom is  possible without God, because, as Mr.  Guinness writes, “it is the biblical view  that is fully realistic about the crooked  timber of humanity that provides the  ultimate check and balance on human power, the abuse of power and utopianism.”

We are created in the image of God as morally discerning beings, but we’re flawed and so must keep anyone from getting too much power. The Framers knew this.

“Progressive secular elites have grown accountable  to no one,” Mr. Guinness writes. “They have thrown off restraint for themselves and respect for others. They have decided they are the rulers, and all others are the ruled. They have rejected the role of faith in public life today, and are now intent on stifling the free exercise of faith wherever they can.”

We can and should laugh at the left’s follies, such as a feminist critique of dairy farming.

But it should be sobering to realize that millions of citizens still cluelessly vote for people who hate their values and pretend otherwise.

Robert Knight is a contributor to The Washing-ton  Times.

Liberals :(
China, Mexico and US Trade. How the United States, Canada and Mexico are now the largest blocks in the world!
How Two Countries face a Trade War
Guns and Crime While Democrats scream ‘abolish ICE,’ child sex trafficker Claudius English convicted thanks to ICE
Anyone posting a threat especially against a law enforcement officer or politician will be banned.