Are taxpayers funding academic institutions to indoctrinate our kids? That disturbing and irresistible question plagued me during the long drive home last week from college orientation. I doubt I am alone in this wake-up call.

Like many other women, I just sent my youngest child to college. I am so proud of him and his decision to join the Army ROTC and study engineering. He will be attending a revered Virginia institution known for its military Corps of Cadets program.

The centerpiece of the campus is the military parade field featuring beautiful pylons bearing the school’s founding principles: words such as “honor,” “duty,” “brotherhood,” and “ut prosim” (that I may serve). The war memorial also bears the names of all known cadets who have given their lives for our nation since World War I.

Established in 1872, Virginia Tech has an honorable and proud tradition in my home state, and its graduates are some of the most accomplished and wonderful people I know. Hokies shine around our nation as leaders and as a great credit to their school. I know many to be people of faith, and many, many are conservative.

Because of this, I was shocked to experience what I can only describe as extreme and overtly leftist propaganda spewed at our children’s orientation. The opening “University Welcome” event for students and parents separated families immediately in the auditorium.

Nobody expected the event to begin with prayer or the Pledge of Allegiance — heavens, no! But one might expect to remember the names of fallen cadets on the pylons or the 32 dead and 17 injured in the 2007 shooting on Virginia Tech’s campus, the deadliest school shooting in U.S. history. Nope. Instead, the administration made the stunning choice to open orientation by recognizing two Native American tribes on whose land the college was built (with the implication that it was stolen).

What followed went from slightly bothersome to downright alarming. The college filled the next two hours with speaker after speaker who introduced themselves with not just their names and titles but also preferred pronouns — as in, “Hi my name is Penny Nance, and I identify as she and her.” At first, parents were slightly surprised; by the end, they were mad.

Every person on the stage looked exactly as you would expect them to identify. At that point, I noticed all the new students’ badges contained not just their names but also their preferred pronouns because the school had made it part of registration. The heavy-handed diversity lecture that followed seemed rather tame in comparison. Parents left the venue in shock. 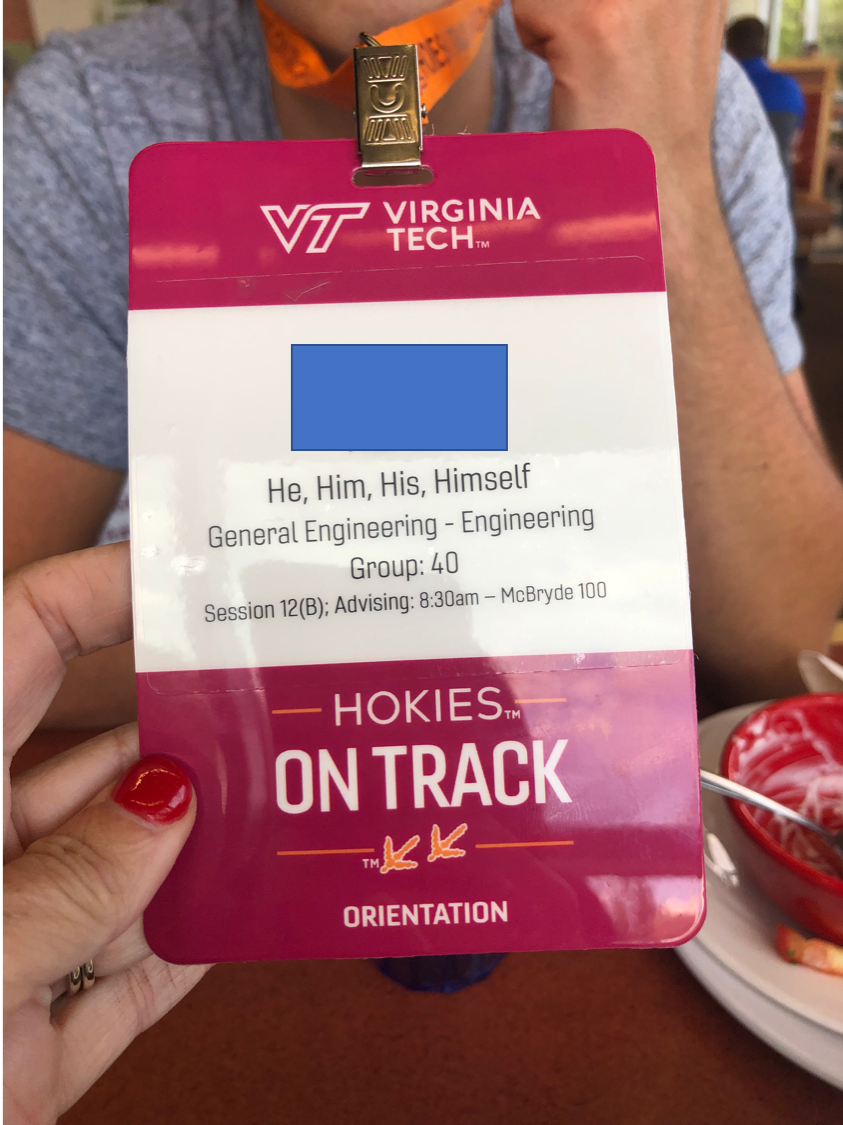 The rest of the day followed the same two-track program, parents versus children, allowing the college to share different sets of information with each. It gave parents the hard line against underage and excessive drinking, but according to students present, the university assured them that campus police are there to help them navigate wayward behavior, which was implied to be normal. “Be open to new experiences,” orientation leaders urged throughout the day.

“Parents, don’t be shocked if your kid comes home changed,” they intoned in the other room — this to the hundreds of parents, including myself, who had saved and sacrificed to send our children to this “top educational institution.” The attitude they conveyed was one of how “privileged” we should feel that they selected our children to attend such a fine and prestigious university. Lucky us.

At one point, after dinner, they sent parents off to oblivious sleep while they lectured students on not making assumptions about each other’s gender or sexuality. Were they suggesting students ought to be fluidly “exploring” their gender and sexuality, as if it were some expected adventure? In the era of “Me Too,” that seems off message.

The school constantly defined and showcased identity group politics, but certainly not all identities. It’s apparently way cooler to be a minority trans woman with food allergies than simply to be an American college student. Interestingly, the university offered Halal food but no certified kosher meals. Religiously observant Jewish students, tough luck, but if you are vegan, you’re in business.

As a mom, part of me wanted to load my son in the car and head up the road to Liberty University, but since he’s an adult, that wasn’t my choice to make. The other part of me thinks: Why should my son be denied the engineering program he wants and earned? Why should conservative kids be forced to become educational refugees from public institutions that, despite enjoying our tax dollars, don’t welcome us?

Let’s not forget, all Virginians pay taxes and thus have equity and stake in what government institutions teach our children. Alumni are also deeply invested in the reputation and direction of their alma mater. I doubt they approve of what appears to be a new “woke” version of their school. Here’s the problem: Virginia Tech and most other public universities have forgotten they work for us.

We must send them a clear message: Every Christian, Muslim, Orthodox Jew, conservative teacher, college employee, and every student whose privacy they are violating — we all have rights, too.

Why should a public university force a young man or woman struggling with identity issues, for example, to disclose those personal details and prominently display them on a name badge? Gender dysphoria is real, and the small number of students struggling deserve to be treated with dignity and kindness.

Why should a public institution be allowed to violate teachers’ First Amendment rights by bullying them into using the made-up terms they/them, zie/zim, ey/em (or about 60 more) instead of she/her or he/him? The reordering of centuries of grammar usage is an offensive overcorrection, and it bullies Christians, Muslims, and other students into violating their consciences to appease a small group of nonsensical identity politics warriors.

Bottom line, why should taxpayers foot the bill for liberal indoctrination? We shouldn’t, and if we all demand it, we won’t have to anymore. The Republican Party is still in control of the Virginia Assembly and Senate. One line in an appropriations bill would assure the rights of students and teachers in this madness.

Virginians deserve better. We do not bow to the ascendancy of the liberal, ivory-towered academic’s worldview over ours. We can both care for and love struggling kids who don’t feel included, while maintaining our sanity.

Get Up and Do Something

I have called out Virginia Tech in this op-ed, but other schools in Virginia and around the nation exhibit the identical issue. It is rampant.

Parents, donors, and alumni, if you identify with this experience, it’s up to you. Our institutions have gotten this out of hand because most people are silent, too afraid of the social media harassment and bullying tactics of liberal activists and professors. Speak up.

First, send screen shots, video, or your story to Concerned Women for America at UniversityWhistleBlower@CWFA.org. We won’t disclose your name without permission, but we will tell your story.

Second, contact your state legislators and demand legislation prohibiting the forced use of speech codes. The state controls most of the funds for public universities and can prohibit the use of those funds for nefarious means. Finally, contact the president of the offending institution or complain on social media while tagging the institution.

I have requested a meeting with Virginia Tech President Timothy Sands. If parents, students, and alumni would simply call to complain, we could at least wake up “the woke” to the fact that conservatives also attend their schools and are sick of the madness.

Campus insanity has gone this far because we were silent. When do we say “enough”?

Penny Nance is president and CEO of Concerned Women for America, the nation’s largest public-policy women's organization with a rich history of more than 30 years of helping our members across the country bring Biblical principles into all levels of public policy.

College
China, Mexico and US Trade. How the United States, Canada and Mexico are now the largest blocks in the world!
How Two Countries face a Trade War
Guns and Crime While Democrats scream ‘abolish ICE,’ child sex trafficker Claudius English convicted thanks to ICE
google-site-verification=KpGtpXKDA2lZfsWu61z2TxKFTbuCKHQ7iDRfHNgz97s