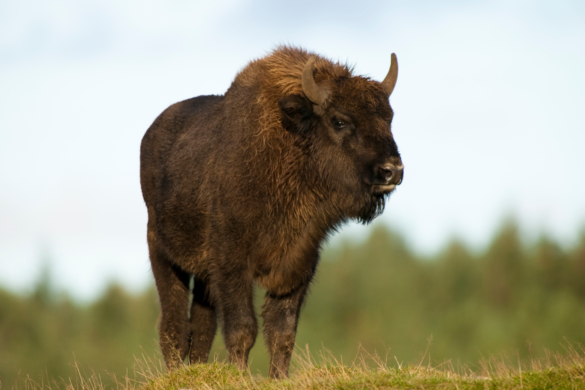 The American bison is a majestic creature. They are the largest land-dwelling mammal in North America. They might seem to be slow-moving and lethargic. But make no mistake they can pack a mean punch and represent a real danger to humans. Especially if you’re foolish enough to get too close.

A recent video is making headlines for someone who was just that foolish. Bison populate the areas around Yellowstone National Park. Tourists in the area are instructed to steer clear of the creatures whenever they cross paths with humans. But some people just don’t listen.

See the video below of the person who pressed their luck and came dangerously close to the massive animal.

The person who uploaded the video also provided the following caption. “This is my friend Thomas trying to feed a bison that was on our dude ranch that is 15 miles from the east entrance of Yellowstone National Park. This bison was definitely over 10, a solitary male that has lost the right to breed, and we also believe he was hurt. Thomas was the animal whisperer but this was definitely not the smartest thing to do. Everyone was okay, no injuries.”

As foolish as the person might have been, he at least escaped unharmed. Hopefully, this is a lesson well learned after the close call.

Another Close Call with a Yellowstone Bison

Even when people don’t instigate the noble bison around Yellowstone, sometimes the massive creature will interject itself if you’re careful. One such incident was also captured on video and shows the unpredictable side of the animal when it lunged at a motorcycle rider passing by

Tourons (tourist + morons) of Yellowstone posted a video of the close encounter. The bison came frighteningly close to the motorcyclist. So much so that the video noted that a “change of underpants [might be] required.”