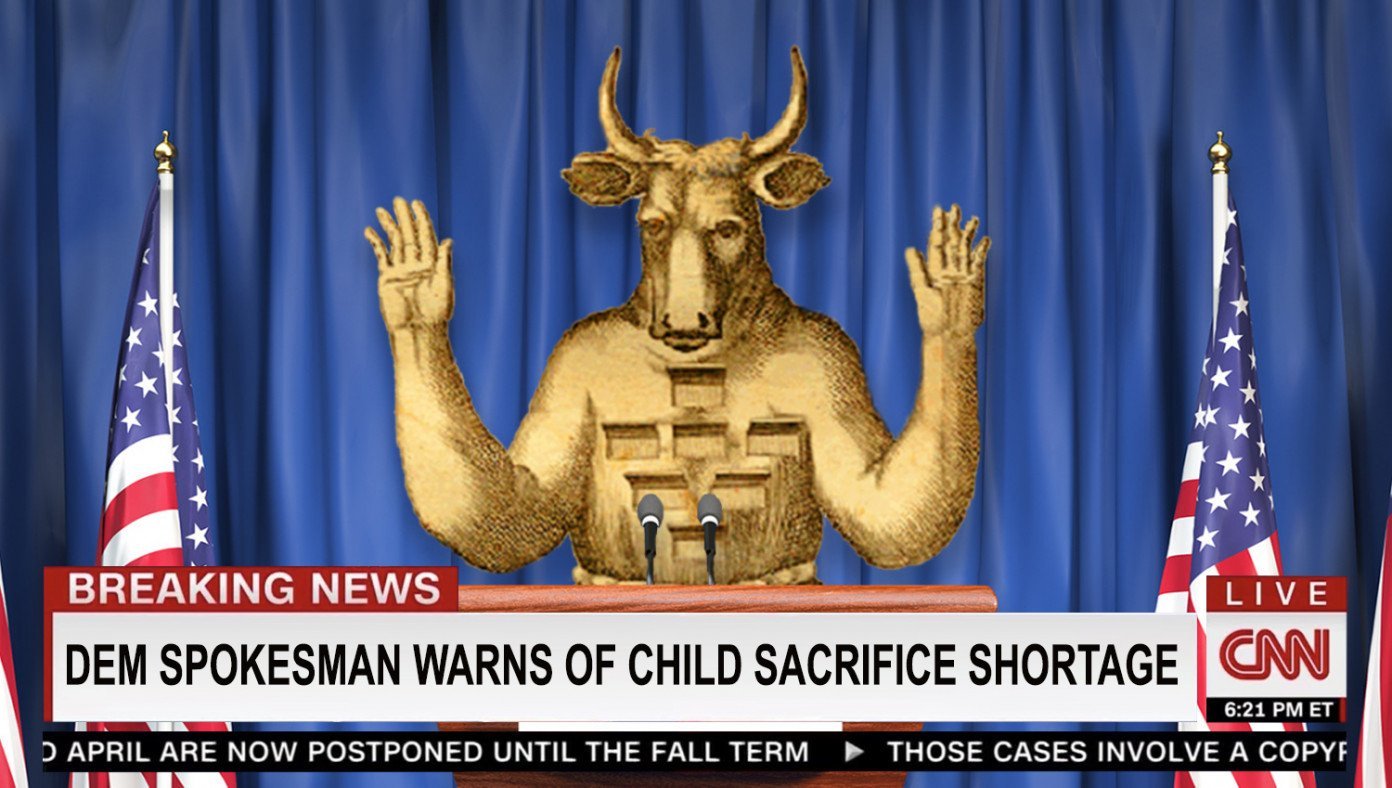 CANAAN—In a somber press release outside the burning gates of torment and suffering, the fire god Moloch warned of looming supply chain issues regarding child sacrifices.

Moloch added that human sacrifices, purifications, ordeals by fire, mutilations, etc., would cease until the supply chain shortages were sorted out through democratically violent means.

"My demon logistics department is reporting a supply chain shortage of children to sacrifice upon burning idols and in fiery pits," said the god of brazen gratification and hedonism. "The scarcity of innocent young lives to be brutally murdered at my feet is mostly due to the US Supreme Court's upcoming reversal of Roe v. Wade, led by white supremacist Clarence Thomas.

"An uncomfortably large percentage of the US population cried out in fear and terror at the prospects of not being able to sacrifice children of a loving Heavenly Father for their own, selfish desires. Eyes rolled back in their sockets and blood-curdling screams pierced the air in the name of egomaniacal convenience.

"What about my career as a corporate drone who loves binge-drinking on the weekends!" cried one woman at the steps of the Supreme Court building while holding a protest sign reading "My Body, My Choice, My Vanity, My Career, My Parties, My Barren, Loveless Life."

At publishing time, Moloch was considering the allowance of back alley child sacrifices using common household objects and horse medication.

Seems he's not taking calls from his supporters...

U.S.—A CNN poll has revealed a surprisingly sizable majority of unborn babies are in favor of overturning the infamous Roe v. Wade decision. The fetuses allegedly frown upon abortions for interfering with their ability to be alive.

According to experts, approximately 100% of unborn babies want to live, and hate the thought of being poisoned, chemically burned, or dismembered by their own mothers. Democrats have decried the fetuses for cramming their personal beliefs down the throats of women who just want to go about their lives freely and kill a few babies in the process.

"We can't let a clump of cells put their needs ahead of the emotional security of a woman!" cried Elizabeth Warren before being canceled by a bunch of women who identify as men for forgetting to use the more inclusive term "birthing person.

President Biden issued a statement in light of nationwide protests. "Look, I don't personally believe that you should murder babies but I'm not going to impose that choice on anyone else. Come on, fetuses!"

Fetuses have reached out to the ACLU for assistance by calling them with tiny womb phones but were rejected for being politically inconvenient.

Babylon Bee
China, Mexico and US Trade. How the United States, Canada and Mexico are now the largest blocks in the world!
How Two Countries face a Trade War
Guns and Crime While Democrats scream ‘abolish ICE,’ child sex trafficker Claudius English convicted thanks to ICE
Anyone posting a threat especially against a law enforcement officer or politician will be banned.