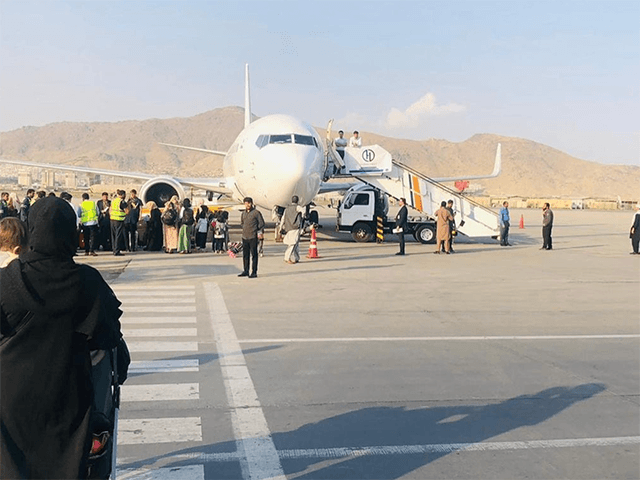 Let my people go. Biden administration says How dare you bring back American Citizens?  Americans Evacuating Afghanistan Stranded in Abu Dhabi After DHS Denies Entry to Charter Flight. But Joe and his loons said alls well. Our allies the Taliban said all who want to leave, left. Yeah right.

Evacuees that fled Afghanistan on September 28, are now stranded at an airport hangar in the United Arab Emirates (UAE) with poor conditions after the Department of Homeland Security (DHS) denied landing rights to a charter flight carrying more than 100 U.S citizens and lawful permanent residents.

The original plan, organized by Project Dynamo, the Shadow Warriors Project, and the Human First Coalition, aimed to fly the evacuees from the UAE to JFK airport in New York and was approved by Customs and Border Protection. The flight plan was later changed to land at Dulles Airport in Virginia until DHS denied landing rights to the charter flight.

Reuters reported 28 American citizens, six people with U.S. Immigration Visas, and 83 green card holders are being stashed at the hangar in Abu Dhabi. Fifty-nine of the evacuees are children.

“The first justification was that there was no procedure by which American citizens could return to the United States on a charter flight, which we did not understand,” Project Dynamo’s Stan Bunner told Al Jazeera. U.S. officials also expressed concerns regarding evacuees potentially having Measles, but Bunner told the outlet that evacuees were confirmed to be up to date on measles vaccination and tested negative for coronavirus.

Are you kidding me? The State Department has announced that it needs to verify and vet the list of passengers on the plane before a charter flight can transport the evacuees to the U.S.

Biden DHS Hating on Americans
China, Mexico and US Trade. How the United States, Canada and Mexico are now the largest blocks in the world!
How Two Countries face a Trade War
Guns and Crime While Democrats scream ‘abolish ICE,’ child sex trafficker Claudius English convicted thanks to ICE