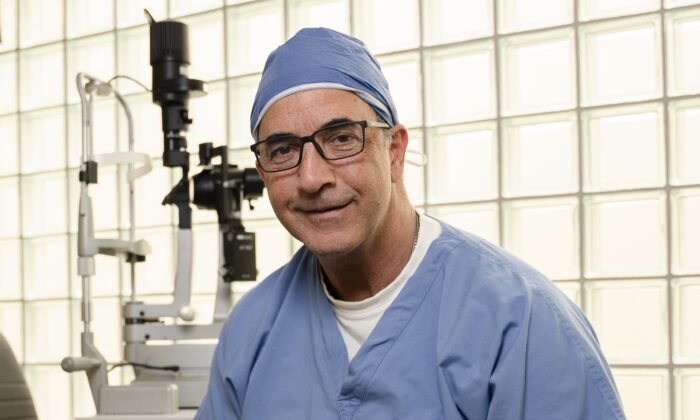 Some viruses, after initial infection, remain latent in the body for a lifetime and may reactivate to cause infection again or a different condition. These kinds of latent viruses are being reactivated in a large number of people following their booster COVID-19 shots, causing symptoms of long COVID and other health conditions, according to Dr. Richard Urso.

Long COVID is a condition where people experience ongoing, recurring, or new health problems weeks to months after first being infected with SARS-CoV-2, the virus that causes COVID-19, or receiving a COVID-19 injection. Symptoms may include brain fog, fatigue, chest pain, and insomnia, among others.

“So in my clinic right now, I am seeing three to five people a week because they know that I am taking a lot of time in my practice to do COVID, and they’re coming to see me with long COVID and … with problems after the vaccine,” Urso, an ophthalmologist, a drug design and treatment specialist, and co-founder of the International Alliance of Physicians and Medical Scientists, told EpochTV’s “American Thought Leaders” program. “And what I’m finding is a huge number of them have reactivated Epstein-Barr, herpes simplex, herpes zoster, CMV.”

Of the more than 100 species of herpesviruses, eight are known to infect humans and remain in the body for life after the primary infection has cleared, and which can reactivate later under certain conditions:

Most people are unaware that they’ve been infected with some of these viruses as they experience no symptoms. “A lot of people are looking at this long COVID as if it’s all viral related problems, specifically to the spike protein or to other issues. They don’t know that we’re seeing this huge reactivation in the herpesvirus family and we have treatment for it. It’s been working really really well,” Urso said. While there is still no standard clinical definition or treatment for Long COVID, Urso says that there are many different repurposed drugs doctors can prescribe off-label to treat the syndrome, such as those used in the I-RECOVER protocol, developed by The Front Line COVID-19 Critical Care Alliance. For long COVID symptoms caused by one of the reactivated herpesviruses, Urso says he prescribes Valtrex and supplements like lysine and vitamin D. “We use lysine because it’s one of those nutritionals that’s good against the herpesvirus family. The ratio of lysine-arginine seems to impact the ability of these viruses to replicate,” Urso said. He added, “I tell people vitamin D is your data analyst. It allows the immune system to make good decisions … And when vitamin D is around, your immune system can recognize, ‘Oh, this is pollen, let’s leave it alone. Let’s attack this pathogen, let’s attack this cancer.’” Urso said he’s been recommending vitamin D since 1995 when he was the chief of orbital oncology at MD Anderson Cancer Center. He came upon a study that showed the supplement “had some impact on a tumor recognition protein” and began to test all of his patients’ vitamin D levels. “Virtually 100 percent of the patients were vitamin D deficient with cancer, colon cancer particularly, we became aware of it,” Urso said, adding that vitamin D has also been “amazing for allergies, it’s amazing for prevention, and resistance against cancer, particularly lymphomas and breast cancer.”

When the pandemic began, Urso said that he couldn’t stay quiet knowing that COVID-19 can be treated early with various repurposed drugs and “reluctantly started treating” patients as a result of other doctors refusing to prescribe early treatment. “I told my patients if you have COVID, nobody is going to help you. I said, first go through the chain, [and] if no one’s going to help you, I’ll help you,” Urso said. More than two years into the pandemic, the Centers for Disease Control and Prevention (CDC) continues to tell people to stay home unless they show “emergency warning signs” that include difficulty breathing, new confusion, and persistent chest pain or pressure. The health agency only began recommending in January 2022 that individuals at high risk of developing severe disease should seek early treatment with one of the emergency authorized medications when they test positive for COVID-19. Throughout the pandemic, the CDC has not recommended people to take vitamin D. Studies have shown that vitamin D can help prevent COVID-19, reduce admission to the intensive care unit, and significantly reduce mortality. A study from Israel found that people who were vitamin D deficient were 14 times more likely to have severe COVID-19.

Lipid nanoparticles (LPNs) are tiny particles made up of lipids or fat that act as a delivery system by encapsulating the mRNA that encodes the SARS-CoV-2 spike protein into the human cells.

Without the LPNs, the mRNA would degrade in a matter of seconds once injected into the arm. Studies have found that the LPNs are not degrading and being eliminated from the body in the 36-hour time frame the FDA recently told The Epoch Times about, nor do they stay only at the injection site.

The Japanese regulatory agency’s biodistribution study (pdf) of the Pfizer vaccine showed that some of the mRNA moved from the injection site and through the bloodstream, and was found in various organs such as the liver, spleen, adrenal glands, and ovaries of rats 48 hours following injection.

Since a normal vaccine requires an “open door” to distribute to other parts of the body, Urso says, “a normal vaccine stays in the arm, pretty much 99.9 percent or 99 percent,” while “a large majority” of LPNs will not stay in the arm.

“In fact, we now know that a large part of it goes into the lymph node right underneath here, and is still making spike protein 60 days later,” Urso said, adding that the spike protein “is actually being found up to 15 months later, in monocytes and other cells, it’s not being degraded.”

Urso said. Urso says that the presence of spikes and LPNs is also “messing with Toll-like receptors 7 and 8,” which are “important for immune surveillance for viruses.”

“So we’re going to see this huge uptick in all the viruses that lay kind of dormant in our body like herpesvirus family.”