How the left tries to distort Thanksgiving. 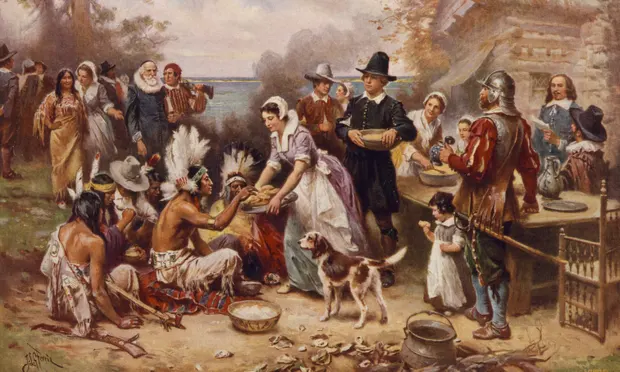 I read an article in the Guardian that was just another distortion of history. Here's the title.

New England once hunted and killed humans for money. We’re descendants of the survivors.

Here's what they posted. The settlers whom many Americans mythologize at Thanksgiving as peace-loving Pilgrims issued government orders offering cash for dead Native American children . True but here's the rest of the story.

There were at least 69 government-issued scalp edicts across the Dawnland from 1675 to 1760, and at least 50 scalp edicts issued elsewhere in the United States until 1885. True

The facts behind the truth. Your first thought was how many thousands, tens of thousands, hundred of thousands did this effect? Actual number? This from the Guardian Article.

So out of 330 million people there are 10 million descendants of the pilgrims.

375 human scalps. But the article makes you think that this was wide spread. I'm sure the number of people who were doing this was minuscule. But again the article wants you to think that the numbers were huge. In closing, I'm having a great Thanks giving and not worrying about feeling guilty for something that's a blip in time.

Leftists Lying Fake News
China, Mexico and US Trade. How the United States, Canada and Mexico are now the largest blocks in the world!
How Two Countries face a Trade War
Guns and Crime While Democrats scream ‘abolish ICE,’ child sex trafficker Claudius English convicted thanks to ICE
Anyone posting a threat especially against a law enforcement officer or politician will be banned.