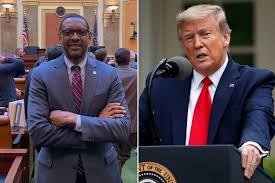 Georgia rep calls out White Supremacists and Race Baiters. Yes state rep Vernon Jones resigned. I guess he had enough of the plantation mentality that the Democrat part is built on when it comes to minorities. He's the black office holder who said he endorsed Donald Trump.

“Turn the lights off, I have left the plantation,” Jones said in a statement. “Someone else can occupy that suite. Therefore, I intend not to complete my term effective April 22, 2020.”

“I don’t plan to leave the Democratic Party because somebody’s got to be in there to hold them accountable —hold them accountable to how they are treating black people [and] root out the bigotry,” he said.  "I’ve seen more Democrats attack me for my decision to endorse @realdonaldtrump than ask me why," he said. "They’ve used and abused folks in my community for far too long, taking our votes for granted. Black Americans are waking up. An uprising is near."