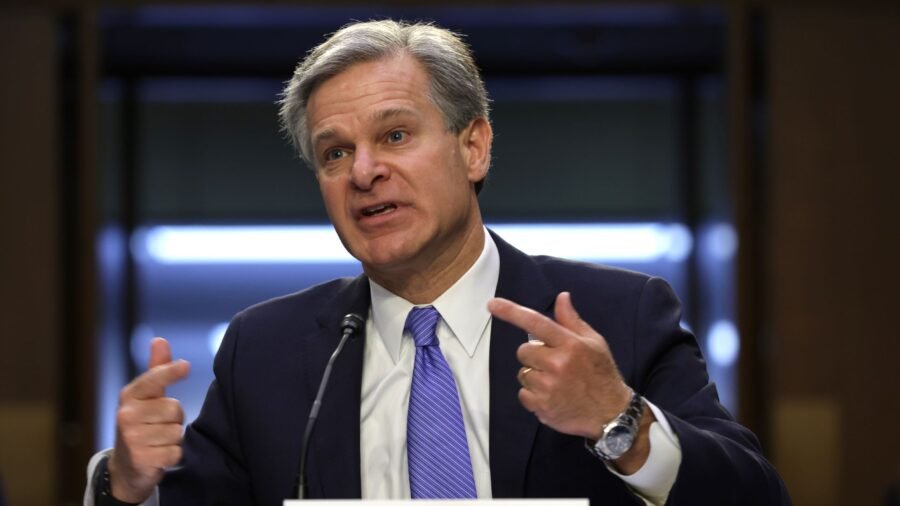 FBI Director Christopher Wray on Wednesday condemned recent online threats against him and other federal agents in the wake of the agency’s raid on former President Donald Trump’s private Florida residence.

Wray, who was appointed as the agency’s director in 2017 by Trump, said violence against law enforcement is not the answer, calling threats circulating online “deplorable and dangerous.”

“Again, violence against law enforcement is not the answer, no matter what anybody’s upset about or who they’re upset with,” Wray told The Associated Press after a news conference at the agency’s field office in Nebraska, where he discussed the FBI’s focus on cybersecurity.

Wray refused to answer questions and provide more details on the hours-long search, where dozens of FBI agents reportedly executed a search warrant approved last week by a magistrate judge in Florida.

Since the Aug. 8 raid on the former president’s private residence of Mar-a-Lago, online messages have appeared calling for a response to the unannounced search.

Reactions included “lock and load” and calls for federal agents and U.S. Attorney General Merrick Garland to be assassinated. On the social networking service “Gab,” one poster going by the name of Stephen said he was awaiting “the call” to mount an armed revolution.  [Interesting how the monitor Gab, isn't it ? -- TPR]

Sen. Rand Paul (R-Ky.) said the search could lead to Garland’s impeachment, urging an investigation to look into whether he misused his office.

In response to the messages, Wray said “it’s important that we view the men and women of law enforcement as people,” noting that they make “heroic sacrifices” for all Americans.  “It takes an incredibly special person to be willing to get up every day and give his or her life, sacrifice his or her life for a total stranger,” Wray said.  [Gee, another deflection -- TPR]

During Monday’s search, agents reportedly “ripped open” an extra lock that the Justice Department (DOJ) and FBI had asked the former president to be installed in early June, Trump said in a post on Truth Social on Aug. 10.

“Without notification or warning, an army of agents broke into Mar-a-Lago, went to the same storage area, and ripped open the lock that they had asked to be installed,” Trump said. “A surprise attack, POLITICS, and all the while our Country is going to HELL!”

The former president’s latest statements, if true, weaken the case that the FBI raided the house solely for the purpose of obtaining the records.

Nothing had been hidden and nothing had been kept secret from them, which makes this all more all the more ridiculous,” Trump’s lawyer, Christina Bobb, told The Epoch Times on Tuesday. Bobb confirmed that the federal agents were looking for presidential records at Mar-a-Lago during the raid.  [It has been revealed that Boob was forced to stand out on the driveway, was not given a copy of the warrant, and was only shown the "warrant" from 10 feet away. They also demanded the security cameras be turned which was refused, and the cameras caught them in areas where the warrant -- if looking for documents -- did not allow them to go...like Melania's clothes closet and bureau drawers. Yep, Classified documents would be stored in with wifey's bras and panties -- TPR]

On Tuesday, the magistrate judge who reportedly approved the search warrant ordered the DOJ to file a response to a motion asking for the DOJ to unseal the warrant no later than Aug. 15. Neither the FBI nor DOJ has issued public comments about the raid, which was first confirmed by Trump late on Monday.

The FBI declined to comment when contacted by The Epoch Times, and the DOJ has not responded to several requests for comment.

Comment on above story on NTD, which is pertinent:

Teena Johnson−So when will the ANTIFA and BLM rioters involved in Billions in property damage and many police officers killed or Maimed/blinded get treated similar to those who strolled through the Capitol after Police ushered them in?
Huh? When will unarmed trespassers be released? They did not even have frozen water bottles with them. There was NEVER an intent among Real Trump supporters to be involved in violence. Release and Show all the video… Get Pelosi’s email and phones. Find out why FBI agents and confidants were there that day! WHY was security non existent and THEN suddenly warlike?
The Entire Justice System is a mess!

I don't agree with using the leftist tactic of killing your opponents to get what you want, but I understand the frustration many feel over the blatant disregard for enforcing the law against privileged, protected classes. e.g. Hillary, Hunter, 'the big guy', Zuck, Soros, etc.

If the leftists do manage to provoke a civil war, it's not going to end well for them. Like the South at Gettysburg, there are too many chiefs -who will be protecting their own @$$e$. Plus, they are massively outnumbered. If most of the military refuses to participate, there aren't enough mercenaries in the world to stop the freedom and justice loving people of the USA.

The example of what would happen? Pickett's charge

Pickett's disastrous charge was SUPPOSED to be part of a pincer movement where the Union forces would be fighting on two fronts at the same time. The only survivable choices for the Union -- had it happened -- would have been immediate surrender or retreat along Baltimore Pike towards Little Round Top and eventually Washington.

But the other half of the attack never happened because Lt Gen Ewell ignored orders to attack. Through sheer laziness, he allowed the Union soldiers to dig into the hill that guarded the Union's rear the night before instead of attacking immediately. This gave him a convenient excuse the next day. After all, Pickett's charge didn't come from his men...

Just like a leftist who might have to put his/her own life or property on the line in a second Civil War...

Deflection Misdirection LIES
China, Mexico and US Trade. How the United States, Canada and Mexico are now the largest blocks in the world!
How Two Countries face a Trade War
Guns and Crime While Democrats scream ‘abolish ICE,’ child sex trafficker Claudius English convicted thanks to ICE
Anyone posting a threat especially against a law enforcement officer or politician will be banned.