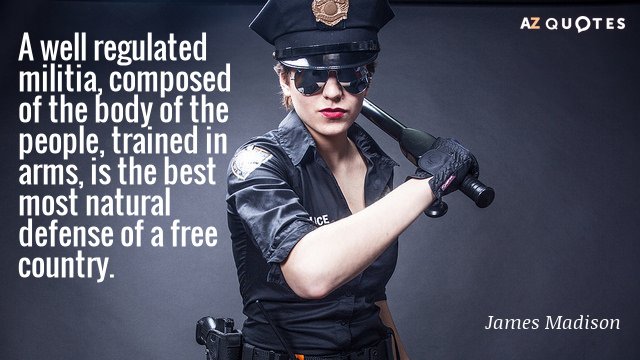 The claim: The Second Amendment reference to a 'well-regulated militia' was limited in 1791 to one musket and 24 bullets

After mass shootings this year in Buffalo, New York, and Uvalde, Texas, many turned to social media to advocate for gun control. Some users argued for weapons limitations to be implemented.

A June 4 Facebook post claimed a "well-regulated militia" – the term used in the Second Amendment's reference to the right to bear arms – included a limitation on the number of weapons militiamen could have in 1791. The post accrued more than 100 shares in a month.

“Did you know in 1791 when the Founders ratified the 2A, a well regulated militia was restricted to 1 musket, 2 spare flints and 24 bullets?" reads the post.

Commenters seized on the claim to assert that the Second Amendment is outdated.

But the limitations described in the post are not accurate.

The figures cited were minimum requirements for militia members – not maximums, according to an expert. The post also gets the timeline wrong: The Second Amendment was ratified in 1791, but the federal law on militia armaments didn't pass until a year later.

The user who shared the post provided no evidence it was true in a response to USA TODAY.

Reference appears to originate from Militia Act of 1792

Around the time the Second Amendment was ratified, there was not a law that set a maximum amount of arms or ammunition that an individual could possess, as the Facebook post claims, said David Kopel, a firearms policy and constitutional law expert who works as research director of the Independence Institute.

But there were laws that established a minimum level of equipment required for militiamen, Kopel said. There were also minimum requirements for men who were too old to serve in the militia or female heads of households, he said.

The mention of specific weapons requirements in the Facebook post was presumably referring to the Uniform Militia Act, legislation enacted by Congress in 1792 that set these minimum requirements. It states in part:

Every citizen, so enrolled and notified, shall, within six months thereafter, provide himself with a good musket or firelock, a sufficient bayonet and belt, two spare flints, and a knapsack, a pouch, with a box therein, to contain not less than twenty four cartridges, suited to the bore of his musket or firelock, each cartridge to contain a proper quantity of powder and ball; or with a good rifle, knapsack, shot-pouch, and powder-horn, twenty balls suited to the bore of his rifle, and a quarter of a pound of powder.

The above quote appears in The Militia Act of 1792, Passed May 8, 1792, providing federal standards for the organization of the Militia, Section One.

According to Kopel, the Uniform Militia Act was the first federal law to have minimum requirements. Before 1792 states and colonies had their own laws, but even those were minimums, not maximums as the Facebook post claims.

Based on our research, we rate FALSE the claim that the Second Amendment reference to a “well-regulated militia” was limited in 1791 to one musket and 24 bullets. That number of muskets and bullets matches the Uniform Militia Act of 1972, which passed a year after the claim asserts. But more significantly, this legislation established nationwide minimums, not maximums, for militia weaponry.

The fact that this article is coming from the USA Today -- a left leaning publication -- and is contradicting the gun control crazies is significant.

The link for the Militia Act of 1792 provided the complete context, including all amendments to it.

How far we've come from the days when everyone was supposed to be trained in firearm use to today.

Then again, as Robert A. Heinlein said, "An armed society is a polite society."

Fact Check well regulated militia
China, Mexico and US Trade. How the United States, Canada and Mexico are now the largest blocks in the world!
How Two Countries face a Trade War
Guns and Crime While Democrats scream ‘abolish ICE,’ child sex trafficker Claudius English convicted thanks to ICE
Anyone posting a threat especially against a law enforcement officer or politician will be banned.