Chuck and Nancy's inaction may cause 20,000 companies to fold. THEY BLOCK FUNDING to American Workers. 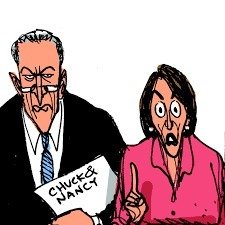 Chuck and Nancy's inaction may cause 20,000 companies to fold. THEY BLOCK FUNDING to American Workers. So the lefts hatred for the American worker continues. After mostly failing to add garbage bills that would never pass on their own, during the last bill, Pelosi and Schumer are at it again. On Thursday at least 20,000 small business loans went unprocessed because Democrats Pelosi and Senator Chuck Schumer would not approve more funding.

Those two want to bail out states and criminals who made bad judgements, but not companies that provide jobs to American workers. What say you?