Censorship: A Deadly 'Cancel Vulture' --YouTube removed the FLCCC channel from its platform for repeatedly trying to save lives

You may not recognize the name Samith Dhamasaroj, but in the mid 1990s, he was the director general of Thailand’s Meteorological Department. Seven years before a 9.2 magnitude earthquake in Sumatra caused a tsunami, killing 230,000 people, injuring 500,000 more and leaving 1.7 million people homeless in 2004, Dhamasaroj began warning his country about the possibility of a devastating tsunami hitting its southern coast.

His calls — for the urgent installation of early warning systems and other actions needed to save lives — were summarily ignored. He was branded as “crazy;” a lunatic. Some provinces even banned him from their territories, fearful his plaintive proclamations of impending disaster would negatively impact the nation’s thriving tourist industry. (Oh, there’s money involved? Shocking.)

We now know that, had Dhamasaroj’s warnings been heeded instead of ridiculed and censored, thousands of lives might have been saved. 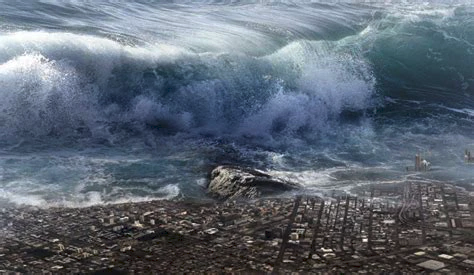 When information is kept from people about how to save themselves from disasters like tsunamis and pandemics, catastrophic loss of life ensues.

At the FLCCC, we understand Dhamasaroj’s experience well. Because beginning in 2020, when the world-renowned FLCCC physician/scholars tried to tell the world that though the COVID-19 ‘tsunami’ was inevitable, there were ways to save lives. There were ways people could save themselves and their loved ones. The FLCCC tried repeatedly for over 20 months to warn the world that failure to adopt proven, FDA-approved therapeutics known to lower hospitalization and mortality rates would prove calamitous, as wave after wave of the killer virus washed over the world.

Now, in 2022, hundreds of thousands of people across the world lie dead of COVID-19. And, according to the FLCCC physicians, many — perhaps most — perished needlessly.

Why? Because the FLCCC had been systematically “Dhamasaroj-ed” by cancel vultures. In a massive, (likely unprecedented) coordinated campaign conceived, orchestrated and executed by a profit-hungry gang that included Big Pharma, elected officials, media giants, tech and government health agencies, the voices of the FLCCC physicians were methodically silenced.

Oh yeah. And they were fired.

Stories disparaging ivermectin and other repurposed drugs for COVID continue to appear in some of the nation’s most “trusted” newspapers: The New York Times. The Wall Street Journal. The Washington Post. Others. They cite medical studies proclaiming that ivermectin does not work in COVID. They never question the design and methodology of these studies (we have); and they have not written even one piece on the over 80 studies (many randomized controlled trials) that say ivermectin does work, in fact very well, in all phases of COVID-19 disease. (They might ask some of the hundreds of thousands who are alive today because of it.)

Why do they do it? Because if they wrote even one truthful story about the safe, effective medicine that’s been used over 4 billion times globally, the colossal payday from the vaccine and novel antiviral drugs would evaporate. Poof!

A case in point happened just this week when the results of the TOGETHER* trial on ivermectin were published. Big Media was again breathless and drooling — swooping in to ‘break the news’ of ivermectin’s impotence against COVID-19.

Might we suggest (yet again) that you consider what they did not tell you? Read the following from our physician team:

The results of this trial, which was predetermined to show ivermectin as ineffective, affirms the need for early treatment against COVID-19 and confirms that conflicted groups continue to influence competitor trials, ensuring they are designed to fail. Several organizations associated with the trial have a paid client relationship with Pfizer, which has secured Federal government contracts worth $5.3 billion for its antiviral treatment, Paxlovid. A full list of trial sponsors and associates can be found here.It is therefore no surprise that the trial was designed to fail. In the medical community, it is common knowledge that COVID-19 becomes far more difficult to treat the longer a patient has had symptoms. Treating early is imperative. Yet the TOGETHER trial studied patients where they started treatment up to eight days after the onset of symptoms.Furthermore, no qualified physician or scientist recommends treating COVID-19 with the low dosage of ivermectin used in the trial, nor treating a patient with ivermectin for only three days on an empty stomach, as TOGETHER did. FLCCC physicians have understood for nearly 18 months that ivermectin works best against COVID-19 when administered with a fatty meal and until symptoms resolve.

And then there was this: Was it mere coincidence—or something else—that caused YouTube to pull our entire channel off of its platform just as the trial data was released and the negative media stories on ivermectin popped up like rabid, unsightly weeds all over the country? This is the message we received:

We have reviewed your content and found severe or repeated violations of our Community Guidelines. Because of this, we have removed your channel from YouTube.

Gone from YouTube are videos about how a small town’s COVID surge was stopped by the use of ivermectin; how some of the most highly published critical care physicians came together to form the FLCCC; how many South American countries conquered COVID with ivermectin;  how the totality of evidence for ivermectin has become scientifically irrefutable; how a nurse saved herself, and hundreds of patients, with the use of ivermectin; how a physician in Nevada started a “treat and test” protocol that saved dozens of her patients; and how black, brown and elderly people have been disproportionately affected by COVID-19.

Also gone are many of our Weekly Updates videos.

Many people who could have saved themselves if they knew of the FLCCC’s therapeutic protocols contracted the disease. They did not know how to protect themselves from getting COVID-19 in the first place… because of cancel vultures.

People who contracted COVID-19 did not know that the protocol the FLCCC developed could have protected them from progressing to the hyper-inflammatory phase of the disease… because of cancel vultures.

People who progressed to the hyper-inflammatory phase of the disease account for the overwhelming majority of deaths from COVID-19. And there may be still more of them to come… because of cancel vultures.

What else might they have taken down that could have helped people… or saved people? Who made those soulless vultures the arbiters of what people have a right to know — or not to know?

We know with 100% certainty that we are on the right side of history.

But still, through it all, on we fight. Because we are fighting for peoples’ lives. Maybe yours. Or the lives of those you love.And we are fighting for your freedom to know what you need to know to save yourself. Just like Samith Dhamasaroj — to whom we offer our abiding respect.

YouTube Censorship Hypocrisy
China, Mexico and US Trade. How the United States, Canada and Mexico are now the largest blocks in the world!
How Two Countries face a Trade War
Guns and Crime While Democrats scream ‘abolish ICE,’ child sex trafficker Claudius English convicted thanks to ICE
Anyone posting a threat especially against a law enforcement officer or politician will be banned.