After These Remarks About Black Voters, Mayor Bill should move to Sacramento. 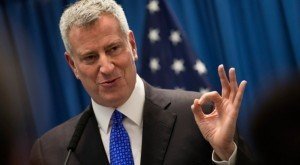 After These Remarks About Black Voters, Maybe It's Time for Bill de Blasio to Just Go Away.

Maybe this type of talk plays in Sacramento ( especially east sac ), but this white plantationist mentality is taking it a bit too far. why do white folks who marry minorities feel that this makes them the official spokesman for minorities? I thought it as just a West Coast thing. Here's Mayor Bill on MSNBC.

During an interview on MSNBC’s Morning Joe, de Blasio was asked why Sen. Bernie Sanders (I-VT), whom he endorsed, lost the Black vote to Biden in South Carolina and on Super Tuesday and de Blasio said it was because Black people only had a “certain amount of information” on Biden.

“It stands to reason if people have a certain amount of information — and I don’t blame them for this, I understand it,” de Blasio said on the show, before a host, Elise Jordan, sought clarification from him on his comment, reported The New York Times.

Now, that’s ironic. The mayor who pretty much said black voters are low info for supporting the establishment is called out for…being “ignorant” about how black voters “navigate politics.” Even with their own supporters, the urban-based snobs just hate rural America. And Biden nabbed a lot of black voter support from these areas south of the Mason-Dixon line on Super Tuesday, the same as Clinton in 2016. This is how Hillary won the nomination.

Mayor Bill Black Voters Backtracking?
China, Mexico and US Trade. How the United States, Canada and Mexico are now the largest blocks in the world!
How Two Countries face a Trade War
Guns and Crime While Democrats scream ‘abolish ICE,’ child sex trafficker Claudius English convicted thanks to ICE
google-site-verification=KpGtpXKDA2lZfsWu61z2TxKFTbuCKHQ7iDRfHNgz97s