A story of Two Americas. One that loves their country and the MSM and their friends on the left. 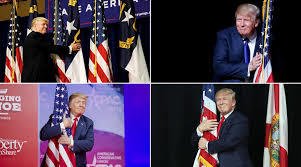 A story of Two Americas.  One that loves their country and the MSM and their friends on the left. With what's going on today we have seen how the MSM and the left have divided this country. Most of the states want to get back to work and tackle this head on.

The MSM and the left are more interested in keeping the country shut down and expanding social programs. More interested in tearing down the greatest economy our country has ever seen. We suffered through eight years of never ending Welfare programs.

The left spoke about this Phony Russian Collusion. But can anyone ever forget how Obama relayed the message about working with Putin when he was re-elected? A total betrayal of our country. Can anyone forget the Uranium deal?

The MSM and Progressives want to keep the country shut down. This from a Progressive who said this to me and the folks who show up out in public.