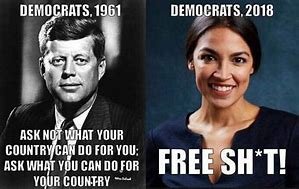 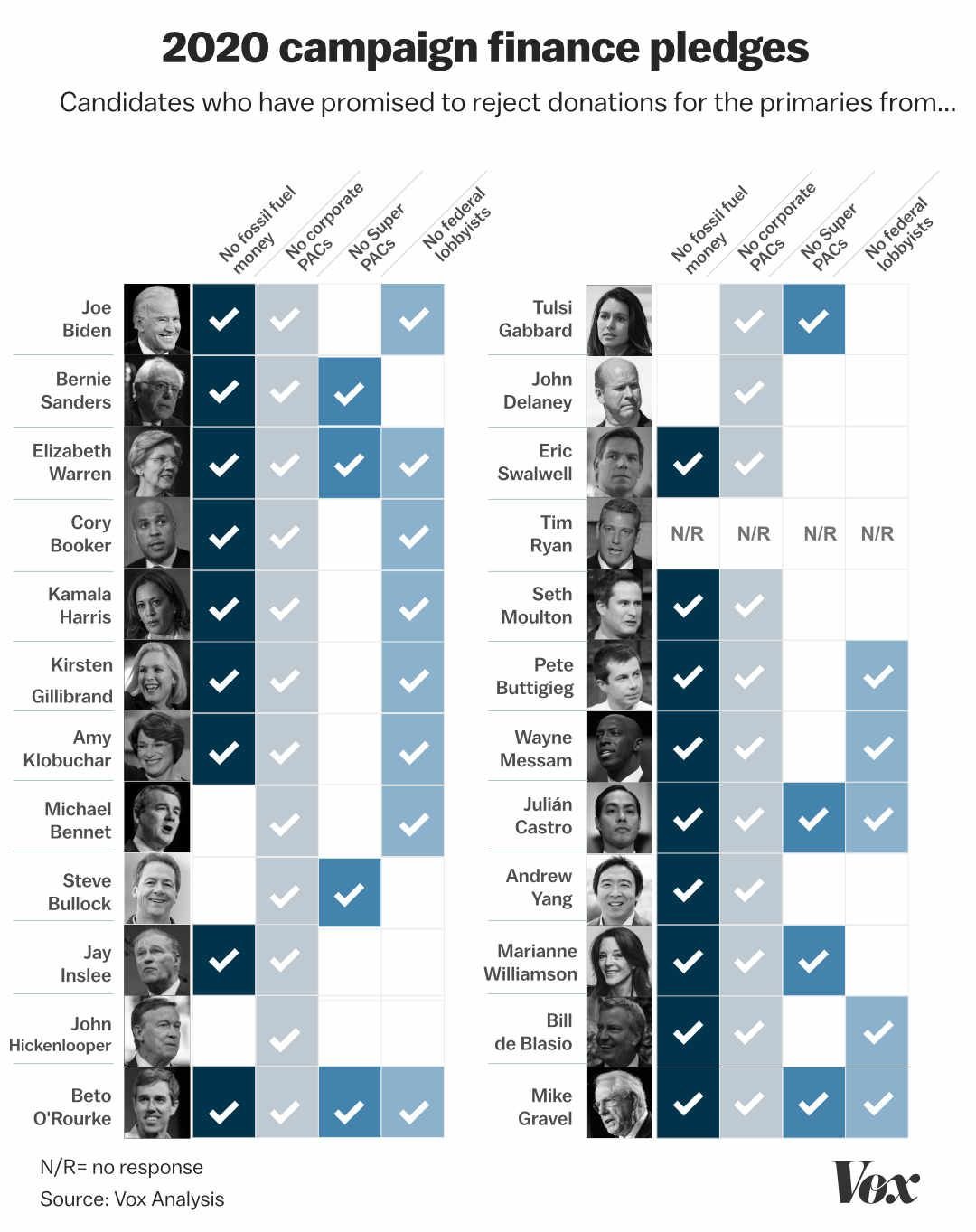 Notee: Joe Biden’s Cory Booker’s, and Kirstein Gillibrand’s campaigns followed up after this story was published to say that their candidate doesn’t want support from Super PACs. The graphics will be updated soon.

Here are the raw tallies:

The official No Fossil Fuel Money pledge pushed by anti-climate change grassroots organizers, signed by 16 candidates (Biden’s campaign said he would not accept support from the industry but he is not listed as a signatory of the pledge), is self-explanatory. With climate change as the greatest threat to humanity’s future, Democratic candidates are shunning the industry that voters hold responsible for it. Rejecting corporate and federal lobbyist money is a signal of a candidate’s willingness to ignore the traditionally influential interests in Washington.

But the reality, of course, is a little more complicated.

The potential loopholes in these 2020 campaign finance pledges

Some of these pledges can still be subverted. Disavowing corporate (fossil fuel or otherwise) PAC money does not mean disavowing support from individual CEOs and executives, though some campaigns added them to their pledge. There are plenty of people in Washington who still wield influence and persuade officials without actually being registered as lobbyists.

Closed-door, high-dollar fundraisers remain perhaps the most pernicious means of influence in modern-day politics, and most of the Democratic candidates have still been participating in those, as the Washington Post’s Michelle Ye Hee Lee recently documented.

But even there, a few candidates stand out: Warren has promised she will not attend any exclusive gatherings like that as part of her platform to weed out corporate influence in US politics. Sanders has also disavowed any high-dollar private events and any donor perks.

“I’m not taking a dime of PAC money in this campaign. I’m not taking a single check from a federal lobbyist. I’m not taking applications from billionaires who want to run a Super PAC on my behalf. And I challenge every other candidate who asks for your vote in this primary to say exactly the same thing,” Warren said when announcing her candidacy.

Even the no-Super PAC promise isn’t perfect; Cory Booker said he didn’t want Super PAC support, but a wealthy Democratic donor started one backing his candidacy anyway. And because of the rules prohibiting coordination between campaigns and Super PACs, there technically wasn’t much Booker could do about it.

Those soft spots are why Fischer regards the rejection of closed-door, high-dollar fundraisers as the gold standard for campaign finance pledges. Even if we were to give candidates the benefit of the doubt, their attendance at those private events where participants had to spend thousands of dollars to join is going to skew — intentionally or not — their views on what issues are important and what should be done about them.

“The only people inside can write a $2,800 check. They get face time with the candidates. The candidate spends an inordinate amount of time with donors, hearing about their concerns and pitching themselves as someone who is going to be responsive to those concerns,” Fischer says. “Even the best-intentioned candidate is going to be affected by that.”

Joe Biden’s recent comments reassuring donors that “nothing will fundamentally change” for wealthy people under a Biden presidency were made at a fundraiser; his campaign does allow press to cover those events, however.

Warren and Sanders were the only candidates to swear off such events in their response to Vox. The one private event that the Vermont senator held had tickets available for $27, the Washington Post reported, not a huge barrier for middle- or working-class voters who want to attend.

These days, “quid pro quo” corruption is pretty rare, Fischer emphasized. Politicians and moneyed interests are simply too savvy to get caught making a specific offer of money for a specific deed.

But campaign contributions can still buy big donors access to elected officials. It’s not just common sense and anecdotal evidence that prove it, either. Empirical research has shown what some well-placed donations can get you.

A 2016 paper from two University of California Berkeley researchers, published in the American Journal of Political Science, ran a remarkable experiment. A political organization tried to schedule meetings with 191 congressional offices between lawmakers and their campaign donors. For some of the requests, the group disclosed that the donor had given money to the campaign; for other requests, they withheld that crucial information.

It was a truly randomized experiment. This is what it yielded (emphasis mine):

When informed prospective attendees were political donors, senior policy makers made themselves available between three and four times more often.

Other studies have found a similar connection. Researchers from Stanford and the University of Wisconsin examined campaign donations from corporations to members of congressional committees that affect their business. They found industries would drop donations to members who were leaving an influential committee and instead direct their money to incoming members, even those of the opposite party.

“We provide evidence that corporations and business PACs use donations to acquire immediate access and favor,” the authors wrote, “suggesting they at least anticipate that the donations will influence policy.”

The Roosevelt Institute ran its own data, examining the behavior of lawmakers who initially voted in favor of the Dodd-Frank financial reform bill and then took later votes to weaken the bill’s provisions, and found that “for every $100,000 that Democratic representatives received from finance, the odds they would break with their party’s majority support for the Dodd-Frank legislation increased by 13.9 percent.”

Sometimes, it doesn’t require any academic rigor at all to see how money influences policy. Rep. Chris Collins (R-NY) said before the Republican tax bill passed in 2017 that his donors had told him to pass the bill, legislation that would hit his home state harder than most, “or don’t ever call me again.”

The pressure on Democratic campaigns: ideals versus practical needs

Ever since Citizens United allowed corporations and rich donors to write blank checks to support their chosen political activities and candidates, Democrats have sworn that they will do whatever they can to put a check on money buying access in politics. The pledges the 2020 candidates have made demonstrate commitment to that goal.

But Democrats often find these promises hard to keep. In prior elections, presidential and otherwise, Democrats accepted Super PAC support while decrying its influence. They defended that compromise by arguing Republicans had no such qualms about allowing big donors to boost their campaigns. Indeed, defeating President Donald Trump remains at the top of Democrats’ agendas — and they may care a lot less about how such a campaign is funded. They don’t want to fall behind in an arms race; Trump has already raised more than $150 million for his 2020 reelection campaign.

The expansive nature of the 2020 Democratic primary field has put new pressure on these pledges. The Washington Post reported recently that Beto O’Rourke, who previously swore off any private fundraisers, had held an exclusive event with maxed-out donors. Buttigieg, Gillibrand, Klobuchar, O’Rourke, and Bennet might disavow corporate PAC money but they have still attended closed-door events with donors in Manhattan or the San Francisco Bay Area in recent weeks, according to the Post.

Some of these candidates are finding there simply isn’t enough grassroots support to fuel their presidential campaigns. As the Post’s Michelle Ye Hee Lee summarized her findings:

Many of the candidates previously had held a handful of high-dollar fundraisers or avoided them altogether, seeking to tap into the populist sentiment that has animated the Democratic base. They tried to capi­tal­ize on the deluge of online donations that helped fuel the midterm elections, rather than making the traditional overtures to wealthy donors, once a staple of early presidential campaigns.

But after a disappointing fundraising haul in the first quarter of the year, and as the primary drags on with no clear front-runner, many of the candidates are turning their focus to wealthy donors — a strategy that could help keep their campaigns viable but may hamper their ability to connect with base voters.

It’s easy to promise you’ll turn off the spigot of big money — until you find yourself choosing between an underfunded campaign and compromising on your ideals. This is the same dilemma Democrats always find themselves in on large campaign donors: They don’t want them, but they think they need them.

Money has a way of grinding down even the best intentions. While 2020 has been an improvement on past election cycles, it still might end up another chapter in that age-old tale for many of its campaigns.