Part 1 may be found here.

Part 2 may be found here.

If an immigrant comes to America and enters into politics, he or she has a choice.  He can work to preserve America and obey and defend the laws and Constitution of the land, or he can use his position of power to aid his ethnic kin from his homeland.

To the extent that this politician is focusing on his ethnic kin, he is racist, for he should be focusing on all of his fellow Americans, and anything to the contrary is a focus on ethnicity and nationality.  No American should vote for such a politician.  Whether it be Democrat Congresswoman Ilhan Omar, California Democrats Kevin De Leon and Democrat Ricardo Lara, or Democrat Congressman Joaquin Castro to name just a few, they are all racists.

On the other hand, maybe racist is too kind a term.  Perhaps they are an advanced guard of an invasion? If that is true, then are they not traitors to America?

Democrat Ilhan Oman, the Minnesota Congresswoman, downplays the 9-11 attacks as a nothingburger. The fact that 3,000 Americans were killed matters little to her; ostensibly her loyalty remains to Islam and its fighters.

Kevin Del Leon, the Senate Pro-tem Leader of the California Legislature, lamented recently that “half his family” was here illegally and used false social security numbers and other identification. He made no apologies about his loyalty to them at the expense of American law and order, or American taxpayers, or other migrants waiting patiently for legal immigration status.  Nope, his loyalty is to his ethnic kin, not America.  He and others have passed laws giving various perks and protections to illegal aliens in California, at the expense of California taxpayers.

Ricardo Lara, the current California Insurance Commissioner and former state legislator, has also helped pass perks and benefits for illegal aliens in California. Those illegals are of course largely his ethnic brethren.  He is proud of it too, as you can see from his website. 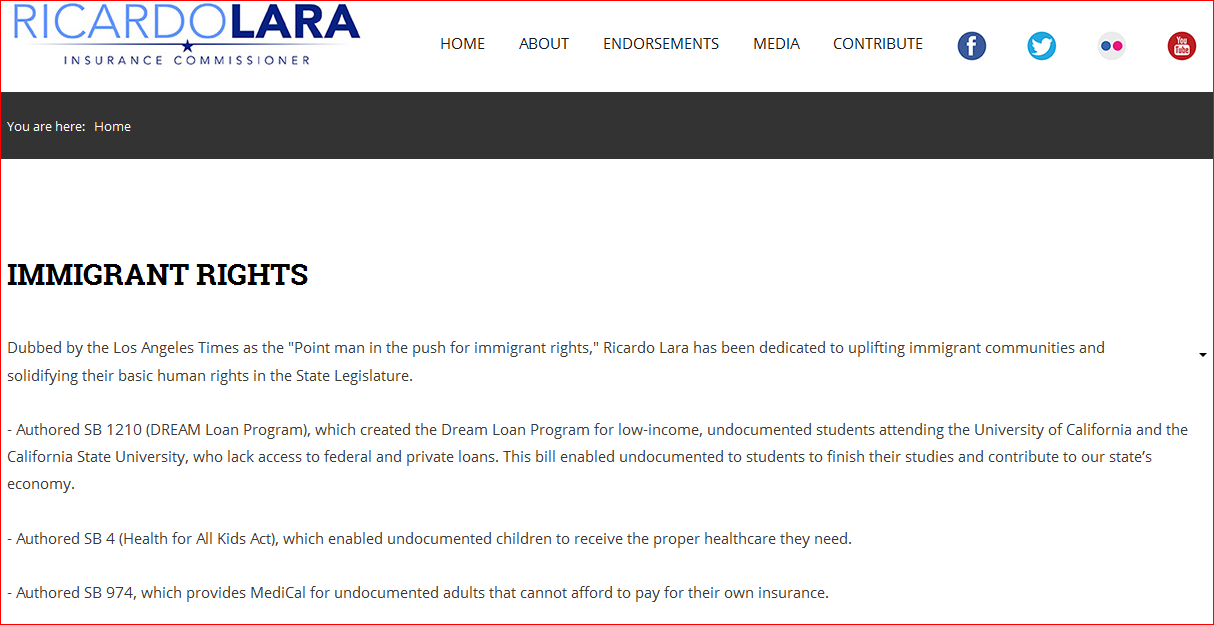 If only that were it.   More aggressively, Democrat Congressman Joaquin Castro, who represents a district that encompasses San Antonio, Texas has called for attention and criticism to Trump supporters- in essence calling for harassment and violence against Americans who lawfully support our President and his plans for a wall on our Southern Border with Mexico.

In the epic Greek poem The Iliad, the 10 year siege of Troy finally ended when the Greeks devised a plan to sneak soldiers into the city via the offering of a large wooden horse with the soldiers hiding inside. The Trojans fell for the ruse, brought the horse inside their walls, and in the late night hours the Greek soldiers snuck out, killed the wall guards and opened the gates, allowing a flood of Greek foreign soldiers to enter, slaughter the inhabitants, and sack the city. Perhaps more precisely a Greek Horse, the story as told refers to the trick as a Trojan Horse, that is, getting the enemy to invite you inside their walls having fooled them into believing that they can trust you when in fact your loyalties are not with the host.

Are the Democrats traitors who are knowingly inviting a Trojan Horse like the politicians noted above? They don’t even hide their loyalties anymore;  Americans seem too lethargic or brainwashed to care.  I believe these Democrats, and many others, are an Advanced Guard of an invasion and sacking of America.

ANY politician takes an Oath of Office and should be loyal to America first.  These oaths the politicians take should be enforced and those who ignore or violate them should be impeached and prosecuted.

#DemocratsBetrayAmerica… yeah, that would work.

Democrats Loyalty Traitor Family
China, Mexico and US Trade. How the United States, Canada and Mexico are now the largest blocks in the world!
How Two Countries face a Trade War
Guns and Crime While Democrats scream ‘abolish ICE,’ child sex trafficker Claudius English convicted thanks to ICE